“Unlike the 2008 Financial Crisis, this crisis is borne of a microbe and not of a financial meltdown.”

As recently as a few months ago, determining the reserve had settled into a fairly straightforward and predictable event. Losses have been extremely low for the last several years which means the Quantitative loss allocation has had a minimal impact on the reserve. Collateral values have been either increasing or stable, resulting in a minimal impact on the reserves for impaired loans. The pre-pandemic focus had been primarily on determining the amount to reserve via Qualitative Factors (QF’s), which made up almost the entire reserve for many financial institutions.

For institutions that had transitioned to CECL, the shifting the reserve allocation from using QF’s to using the Quantitative Life of Loan Losses was already taking place. In most cases, the results were a relatively modest bump in the amount of the reserve. The benign economic environment meant that reserves continued to be a significant multiple of actual losses.

When COVID-19 began its march across the globe, institutions were suddenly faced with addressing (for Q1-2020) the issue of reserving for this explosive pandemic. As state and federal governments enforced closures across the country the entire US economy became threatened with a severe and prolonged recession. Unlike the 2008 Financial Crisis, this crisis is borne of a microbe and not of a financial meltdown. Thus, the financial industry is entering a “virus driven” recession with its own unique challenges. For most institutions going into this crisis, earnings were decent, they were adequately capitalized and an adequate/elevated reserve was in place courtesy of the QF’s. Current discussions we are engaged in with clients during ALLL model validations and in the general course of business are centered on the reserve and this virus driven financial crisis. The critical questions now coming from bankers regarding the reserve are, “How do I reserve for this, given all of the uncertainty that exists, and the (as of right now) lack of actual losses? And how do I support the reserve decisions I make?”

This recession is unique in that it provides (in the short term) an opportunity to approach reserving from a strategic perspective. In addition, other tools that are not typically applied to the reserve, such as stress testing, are now important in determining the appropriate amount of the reserve. In this article we will review the current situation, what is unpredictable and predictable about it, and then discuss ways to address the reserve over the next few quarters.

Let’s begin with the unpredictable. First, we do not know what the length or depth of the pandemic or the accompanying recession will be. There are many forecasts out there, but all have a significant amount of uncertainty associated with them. Second, we do not fully understand how the government will react and the steps to be taken to mitigate the financial impact to businesses and consumers. We have seen in the initial stages what can be characterized as throwing money at the problem and allowing banks to issue deferrals and forbearances without impact to credit quality.

The objective of this initial government stimulus package has been to build a bridge over the recession and minimize the impact on businesses and consumers. This, however, has been fraught with timing missteps resulting in a swinging and rickety bridge which feels like it could collapse at any moment. Third, we do not know how other economic events will exacerbate or alleviate the pandemic recession. These events include low oil prices, the continuing retail store challenges, currency valuations and the stock market decline, which are causing margin calls and covenant breeches. These are just a few of the additional exogenous events that are somewhat unrelated to the pandemic and are causing stresses of their own.

From the list of unpredictable events, it would seem like nothing is certain. Realistically though, there are always things that are known and have a reasonable certainty to take place. While the uncertainties are significant and far outweigh the certainties, there are components that can be used in the reserve analysis. The following is a list of the (somewhat) predictable components of the pandemic recession and how they can relate to the reserve.

THERE ARE MANY OTHER CERTAINTIES AND UNCERTAINTIES, BUT THE KEY IS TO DETERMINE AN INCURRED LOSS RESERVE BASED ON THE MOST RECENT QUARTER END AND SUPPORT THIS ANALYSIS. HOW MIGHT THIS LOOK IN PRACTICE?

Again, let’s start with the Q1 2020 reserve, something most institutions have completed by now. For this quarter, losses had not yet materialized in a significant way. There may have been a spike in the 30-day delinquencies. However, due to the implementation of the shutdown (also referred to as “Shelter In Place”) at or after the Quarter End, the quantitative part of the allowance would not have been impacted. The quantitative component likely remains a minor portion of the reserve for Q1.

In assessing how to increase the reserve of Q1, given that the shutdown is projected to persist for an indeterminate period, institutions must determine how to calculate and prove out an increase. Initially, one can use the economic QF (QF#2 – see QF chart in the table following this section).

If a bank has a significant number of forbearances and deferrals being processed, one could also increase QF (#1) for changing terms on loans as well, but the significant impact on the reserve would most likely have been applied to the Economic QF (QF #2,). To support the increase in the reserve, consider the use of a stress test for cash flows (Debt Service Coverage – DSC). It is important to remember the Incurred Loss approach requires the reserve to be based on loans that are defaulting or are probable to default in the near future (and haven’t been discovered yet).

Moving on to Q2 2020, there will most likely be an initial wave of defaults for businesses that were already weak and not granted forbearances. Some will probably seek bankruptcy protection, which will lead to an increase in impaired loans and charge-offs. This number will be somewhat mitigated for credits that received a deferral. Loan payments may be approaching the 90 plus day delinquency threshold for non-deferred credits. It is important to note however, that stimulus money is most likely beginning to flow in, and may mask some of the delinquencies. This is the time to have formally conducted a targeted cash flow (DSC) oriented stress test in order to identify the weak credits that are surviving via stimulus money. The portfolios of C&I, CRE, Consumer, and RRE loans should be included in this analysis to determine those that are most likely using stimulus money to remain liquid. For this analysis, auto loans are probably not included because consumer information retained by the bank is not typically updated. A stress test on recent credit scores would be appropriate for the consumer portfolio. One should assess the severity of the impact on collateral values on auto loans due to a glut of used cars as well as market inefficiencies due to temporary closure of the auto auctions hampering liquidation of the collateral. The analysis should also factor additional legal and storage costs as these will increase significantly over historical trends. Finally, banks should review the use of credit lines and speed up the utilization of them for the unsecured allocation captured on Schedule RC-G, Other Liabilities.

This quarter will also begin to provide insights as to how long and deep the recession will be. At this time, such information is unknown but more clarity should be realized as information about government support programs are understood, along with a better insight of the realities of a restart of economic activities.

By Q3 2020, a clearer picture of the economic impact should be in place and uncertainty should lessen. The stress test will continue to be of significant value (stressing of both cash flow and collateral) because forbearances will be expiring (assuming banks have set the forbearance period for six months) and there will be a need to understand the credits that will default after this period is done.

If the clearer picture indicates the recession has lengthened, collateral values will show stress due to a lack of buying power and glut of distressed asset leading to fire sales and uncertain valuations. The reserve should increase to reflect lower economic activity. However, if the indicators are that the recession has diminished, then an economic recovery should be underway, assuming the other economic stressors aren’t continuing. The stimulus money will have done its job and protected the economy through its worst part. In this case the reserve can begin to be “normalized”. While charge-offs and delinquencies will now be impacting the quantitative component, the QF’s should begin to show stability. All QF’s should be considered for their impact at this time.

With Q4 2020, most financial institutions are at the end of their fiscal year. The allowance is a fiscal year activity (with quarterly funding) and the funding of the reserve comes from net income. Now is the time to review the funding over the previous three quarters as well as the credit losses and ensure the reserve is “properly” funded. Over or under reserving directly affects income and can lead to criticism from auditors and regulators.

At present, there is not a clear view of how this crisis will look at year end 2020. We tend to look at any crisis as a continuous event and attempt to use this consistency view in our analysis as it unfolds. But, as we have seen, the whole virus recession started as a discontinuous event with a sudden and direct decline driven by efforts to contain the virus. Will there be surges? A second spike? Will there be a vaccine? There are many unknowns at this time but what is known is that change is certain. The ALLL is not meant to manage credit risk but rather record the impact of credit risk as of each quarter end. Keep this in mind when funding the reserve through this crisis. The separate but overlapping areas, of Accounting and Credit, have different drivers and responsibilities, treating them separately will enable banks to effectively manage through the crisis.

QUALITATIVE AND ENVIRONMENTAL FACTORS (QF’S) FROM THE 2006 REGULATORY GUIDANCE 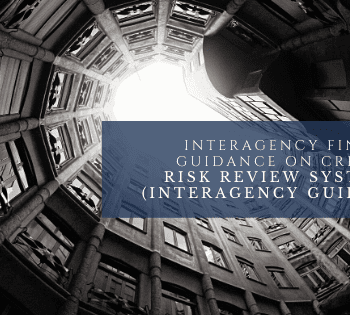